Whether you are someone who has a face that flushes easily or someone with constantly reddened skin, facial redness can be a hard thing to deal with. It can change daily and be difficult to handle. Many dermatologists have found that this is one of the skin conditions that makes patients the most upset.

Acne sufferers often have a background of redness all over their affected skin. People with rosacea become easily red from triggers like the sun or even a glass of wine. Others have a condition called perioral dermatitis which causes redness around the mouth, chin and nose areas. Whatever your cause might be, below are some simple treatments that are quite gentle on the skin. These treatments have also been found to be quite effective when dealing with skin redness, regardless of the source of the redness.

What Causes Redness in the Skin?

One of the most common causes of persistent facial redness is rosacea, a condition that affects up to 14 million Americans. Increased blood flow and visible blood vessels are part of the problem. The exact cause of this condition is not clear but experts believe that it is a combination of genetic and environmental factors. Apart from rosacea, facial flushing can also be brought about by severe acne, lupus, alcohol consumption and taking some types of medication. Skin redness may also result from allergic reactions, burns and inflammation. For some very sensitive individuals, even a change in room temperature could bring about a sudden flush of the face. 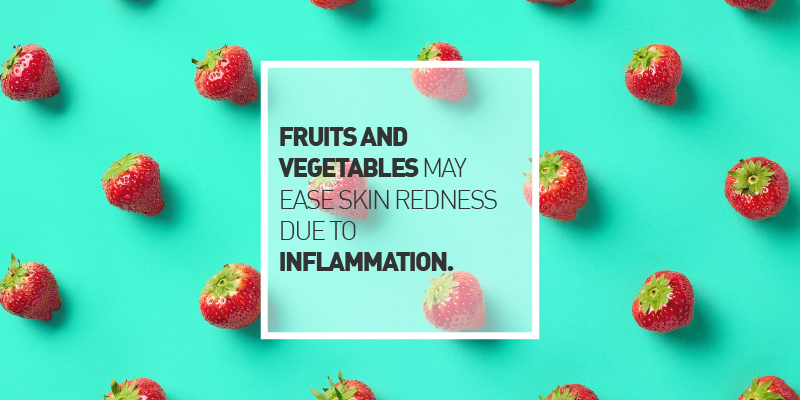 Eating the right foods has proven to lessen the amount of redness in the skin.

Fruits and vegetables may ease skin redness due to inflammation. The better the nutritional facts are concerning a particular fruit or vegetable, the more antioxidants they usually have. Antioxidants have been known to reduce skin redness. This is especially true for the skin of the face. Antioxidants work against the damage done to the skin by free radicals. Dark red and orange fruits and vegetables, such as cantaloupe, butternut squash and tomatoes are very high in vitamin A which helps the body shed old skin cells and produce new ones. This keeps the skin smooth and resistant to irritants and redness.

Anti-redness teas amy help reduce symptoms. The polyphenols in green tea have skin rejuvenating properties. Research revolves around drinking green tea, but some dermatologists have found that using the teas topically can also be useful for clearing redness in the skin. Camomile and peppermint teas can benefit any type of facial redness. Be sure to check all teas against any allergies that you might have.

To make a topical tea compress, put several bags of tea into boiling water for ten minutes. Cool the liquid in the refrigerator, pour onto a washcloth and press onto the face for up to one minute. At most, you can do this process one to two times per day. If you have sensitive skin this is a treatment that you should use only once a week. You could also try a spot test before putting the washcloth on your entire face. Try just putting the tea on a small part of the face first.

Manuka honey is produced primarily in New Zealand by bees that feed on the flowers of the manuka tree. It is very rich in antioxidants and had been found to be a powerful anti-inflammatory. The honey also has antibacterial effects against the bacteria involved in acne. It additionally benefits rosacea and other types of skin redness. It can do all of this while keeping the skin hydrated and moisturized. For topical use, you can buy manuka honey that has a UMF/OMA rating of 15 or above. These rating numbers come from a system developed by scientists in New Zealand to describe the activity level of the honey. You can apply the honey directly to the skin as a daily cleanser.

As frustrating as it can be to battle facial redness, there are remedies that can help you. If you are someone who has sensitive skin, the best way to combat redness is through internal methods. This means watching your diet. As the body’s largest organ, the skin can reflect any number of internal imbalances. Paying close attention to what you are eating could really change the redness in your skin. Using carefully selected topical products can reduce irritation. You should always use caution when introducing a new product or ingredient to your skin care routine even if you don’t have sensitive skin.