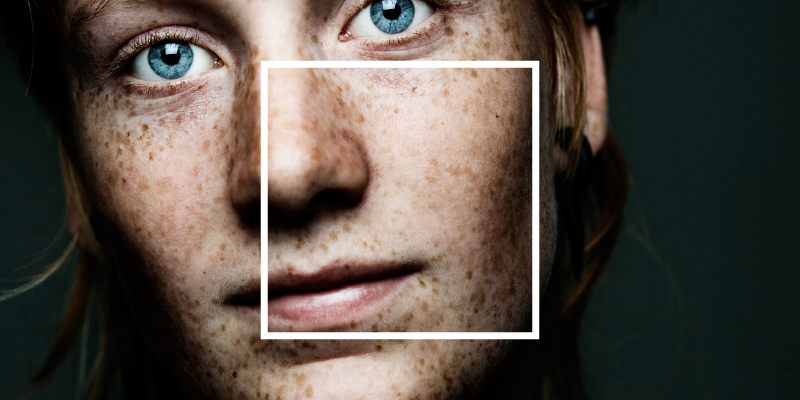 Who doesn’t think the little red-headed girl is cute with her smattering of dirty freckles dotting her facial features?

Freckles can be cute.

And in today’s world, porcelain-perfect, clear complexion isn’t as sought after and coveted as it once was. People are being celebrated for their own natural uniqueness. Thick foundation is going down the drain, and concealer is going back in the bag. Women today are proud of their complexions and the differences they showcase.

Alright, that’s taking it a bit far. Your freckles aren’t going to suddenly come alive and turn your face into a horror film scene. They’re not going to cause a traffic accident.

They can be a warning sign that you’ve spent too much unprotected time in the sun and you should be watchful of changes to your skin and be prepared for early signs of aging to appear. Your fair, freckled skin means you’re more at risk for skin cancer.

A Little About Freckles 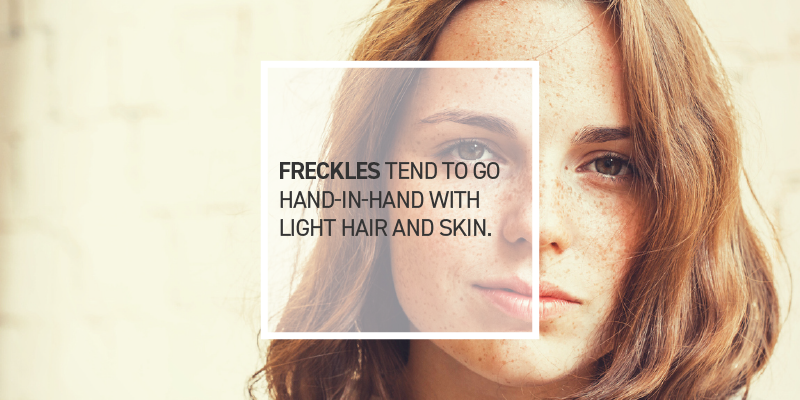 Your tendency towards freckles is genetic, based on one of the genes that regulates your skin and hair color. Freckles tend to go hand-in-hand with light hair and skin.

There are two kinds of freckles. One changes color as a result of sun exposure. They get lighter in the winter, and darker in the summer. The other kind doesn’t change at all. Once they appear, they stay put.

Regardless of whether your freckles stay the same all year, or change with the seasons, they are all the direct result of sun exposure over time. You’ll never see a baby with freckles, though that would be pretty adorable! If a person who is genetically-prone to freckles never went out in the daylight, freckles would never develop. “You really can’t freckle unless you’ve had sun exposure,” explains Dee Anna Glaser, MD, chair of the department of dermatology at St. Louis University. “Even if you inherit that tendency, if your mom and dad were the most amazing sunscreen advocates and kept you out of the sun, you probably still wouldn’t freckle.”

Generally, you’ll start to see freckles develop in an adolescent around the age of seven or eight.

Freckles develop as your body’s means of trying to protect you from the sun. Melanin (the pigment in freckles) makes your skin more resistant to the sun’s UV rays. While freckles develop because of the sun, they are not the same thing as sun damage. With sun damage, your cellular DNA is actually messed up, which can lead to a breakdown of the skin’s collagen and elastin and possibly tumor growth.

They may indicate how sensitive your skin is. Those with a lot of freckles have more sensitive skin and would be more prone to developing skin cancer. Have no fear, though. The freckles, themselves, are not cancerous.

How Do Freckles Work? 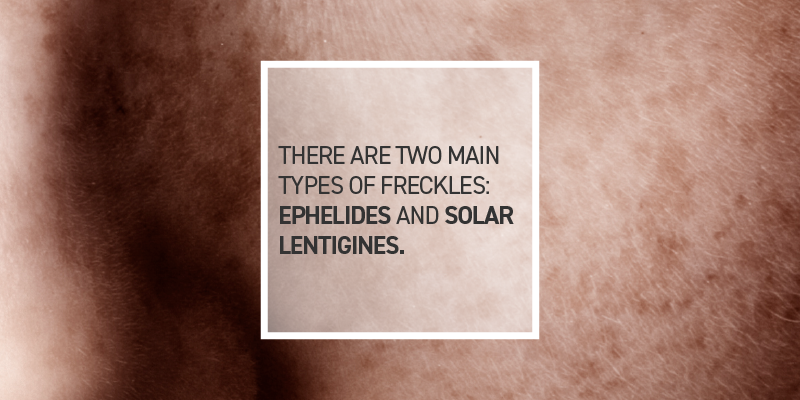 There are two main types of freckles: ephelides and solar lentigines.

Ephelides are the result of both genetic makeup and sun exposure.

Solar lentigines are primarily the result of sun exposure.

Ephelides appear on the face, neck, chest, and arms and develop mostly in the summertime, fading during the winter. Solar lentigines accumulate with age, especially after 40. They’re generally found on sun-exposed areas and do not change with the seasons. They’re commonly present at the sites of previous sunburns and sun damage. They also generally appear larger and darker than ephelides.

Be Cautious If You Have Freckles

Freckles, themselves, are always harmless, but could suggest an increased risk of skin cancer. If you have pale skin and freckles, you’re definitely at a higher risk of developing skin cancer than someone of your same skin tone that doesn’t have them. Always keep an eye on any pigmentation you have, and know your ABCDEs of skin safety! If you note any changes at all in your freckles, have them examined.

If you have a lot of freckles, signs of skin cancer may commonly be ignored or passed over, as they may blend in with your freckles. Those with freckle-prone skin are encouraged to visit their dermatologist twice yearly to be checked. Your dermatologist will be able to spot the difference between a freckle and a lentigo (sunspot). “Healthy freckles, with no underlying damage, should intensify when you’re getting more rays, and fade—even disappear—when you’re in the sun less,” says Francesca Fusco, M.D., an assistant clinical professor of dermatology at Mount Sinai Medical Center in New York City. “Sunspots, on the other hand, are going to be darker than your freckles and stay dark no matter how much exposure you get.” 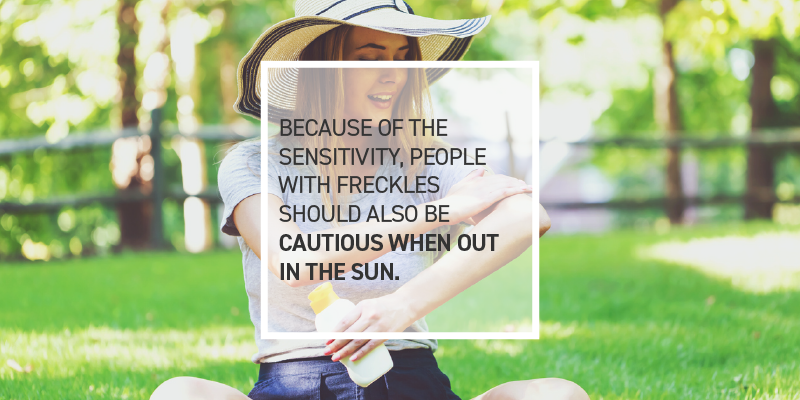 Because of the sensitivity, people with freckles should also be cautious when out in the sun. Cover as much of your skin a possible with UV protective (UVP) clothing and wear a wide-brimmed hat to protect both your face and neck. Protective sunglasses will help cover the area around your sensitive eyes.

It’s important to incorporate sunscreen into your daily regimen, even if you’re not planning on lounging by the pool. Your skin is exposed to UV rays on a regular basis, even just headed to and from work. Carefully applying sunscreen is especially important if you’re spending any amount of time in the sun.. The American Academy of Dermatology recommends you choose a broad-spectrum sunscreen with SPF of at least 30. Apply it generously 15 minutes before going outside to ensure it’s ready to do its job when you hit the beach. Apply it at least every two hours. More if you’re swimming or sweating.

This also includes the wintertime! Protecting yourself from the sun is usually the last thing on your mind when you’re bundled to the hilt, but your face still receives plenty of UV rays in the winter, too.