We’ve all had sunburns. That stingy-itchy-prickly-hot sensation has got to be one of the most uncomfortably-annoying feelings. Yet we do it to ourselves time and time again.

Sunburns can be more than just short-term pain and discomfort, though. You’ve heard the obvious: Ultraviolet rays can cause skin cancer. There’s that. And who wants that? And no, you’re not invincible. Just because you’ve been lucky so far doesn’t mean your luck won’t run out. Skin cancer can happen to anyone.

What you may not know is that UV damage is the number one contributing factor to aging changes. And the damage is cumulative. That means that every time you get hit by the sun’s rays, your skin sustains damage that will not dissipate over time, but will build on itself until you look in the mirror one day and notice fine lines, wrinkles, age spots, and sagging skin.

Once you receive the burn there’s nothing you can do to reverse the long-term damage.

So, your best advice is to avoid amassing damaging exposure at all. Avoiding direct sunlight during peak hours, wearing sunglasses and protective clothing, and applying sunscreen daily (even in rainy weather) can all go far towards protecting you.

But we know that’s sometimes much easier said than done. So what can you do to ease the discomfort when you do catch a burn? How can you get relief in the moment? There are ways you can help nurse a sunburn.

While it may seem like a no-brainer, getting yourself out of the sun the second you suspect you are burning is vital to preventing any further damage. You should preferably skip the shade of a tree and elect to head indoors.

New York University’s Langone Medical Center’s Robert Friedman, MD says it’s important to cool the skin down. You’ll want to skip the shower, though. The continued blast of water on your irritated skin will not feel very good. “I suggest taking a bath to cool down the skin gently,” Friedman advises. Frequent cool baths (or showers if you don’t have the option) can help to alleviate the pain.

If you can stand yourself, avoid soap at this point. Soap tends to dry your skin even more than it already is, irritating the burn. Instead, try mixing the bath water with baking soda, which has been shown to help relieve inflammation and itching. It works best when it’s allowed to dry on the skin, so plan to air-dry instead of toweling off. Apple cider vinegar is another soother you may already have on hand. Dermatologist Carl Korn, MD, suggests mixing cool bath water with 1 cup vinegar. “It’s a great astringent; it soothes sunburn pain,” he says.

If you absolutely have to use soap, grab something mild like a baby soap and be sure to rinse completely. 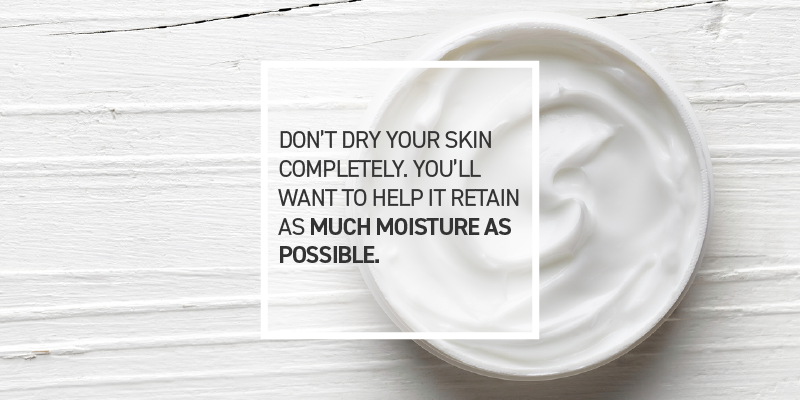 The sun zaps moisture from your skin, so be sure to replenish it regularly over the next few days with a good after-sun moisturizer. The best route seems to be a two-fold approach.

Don’t dry your skin completely. You’ll want to help it retain as much moisture as possible. Smooth on a nourishing bath oil and let it soak in for a minute before applying a moisturizing cream or lotion. “This is a really important step,” says Rodney Basler, MD, “or you may find that your skin feels drier than before.”

“When choosing a lotion, reach for something that is both moisturizing and hydrating so that it helps trap moisture in the skin,” says Whitney Bowe, MD, New York City Dermatologist. “Look for ingredients like ceramides, glycerin or soy. I also like lotions that contain oatmeal, which is particularly soothing. Some fancier creams contain antioxidants like vitamins C and E, which can also help tame inflammation in the skin.”

Avoid anything with petroleum because it will trap heat in your skin.

A sunburn draws fluid to the skin’s surface and away from the rest of the body. “Bad sunburns cause a process called vasodilation, where your blood vessels dilate and you lose water from your skin very quickly,” says Bowe. “This can lead to dehydration, fatigue and even heat stroke if not treated.” That’s why you may feel extra tired after a long day in the sun.

Drinking extra fluids can help to prevent that dehydration. Drink plenty of water and sports drinks that help to replenish electrolytes immediately after you notice the burn and while your skin is healing. “Coconut water or other waters with added electrolytes can be even more effective at preventing dehydration,” Bowe adds.

You can also help by eating water-filled fruit like watermelon, honeydew, cantaloupe, or grapes.

The old aloe remedy really does work. It’s been proven to help promote healing of burns. “Aloe is a cooling agent and an anti-inflammatory,” Friedman says. Aloe can soothe mild burns and is generally considered safe.

Your instinct to grab something cold and damp is also spot-on. Wrap an ice pack in a damp cloth and hold it over the burn to absorb some of the heat from your skin, constrict the blood vessels, and reduce swelling. For an added kick, soak the cloth in either skim milk, egg whites, or green tea. The proteins in milk and egg whites coat and calm the burn, while green tea reduces inflammation.

5. Anti-Inflammatories Are OK for Sunburns

“If you’re still feeling uncomfortable, consider taking aspirin, naproxen, or ibuprofen to help reduce any redness, swelling, and discomfort,” says dermatologist Jeffrey Brackeen, MD, a member of The Skin Cancer Foundation. They may take the edge off the pain.

You can also use a one percent OTC cortisone cream for a few days on those extra-irritated areas to help relieve some discomfort.

Avoid anything with benzocaine and lidocaine. While they can both help to numb the area a bit, they can cause irritation and allergic reactions.