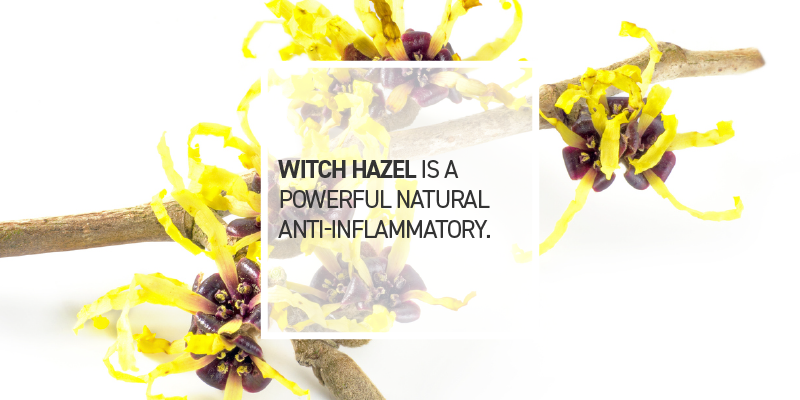 You’ve probably seen witch hazel when you’ve peered curiously into your grandparents’ medicine cabinet, but it seems to be pretty mysterious and sounds like voodoo magic. A certain Eagles song may have even popped into your head.

Oooooooh. . . .just the name evokes visions of women dancing naked around a fire under a full moon while waving branches of herbs and chanting anti-acne incantations.

The reality is witch hazel is a highly effective tool in your skin care locker and is very much the unsung hero, resigned to living a life of shelter in the dark corner of your closet. . . .until now! We’re here to set the record straight and shed some light on this often overlooked skin care gem.

What Is Witch Hazel?

Made from the leaves and bark of the witch hazel shrub (Hamamelis virginiana), it’s a clear liquid astringent with a faint herbal scent. It contains many chemical compounds like calcium oxalate, safrole, and eugenol that lend their magical healing powers. “Witch hazel has long been recognized worldwide as a popular and effective remedy to clarify skin and shrink pores,” says holistic health practitioner Claudia Matles. “It has a long history of use in the beauty industry.” Native Americans first used it for its medicinal properties to treat swellings, sores, infections, and inflammation, and the Puritans later adopted its use.

Benefits of Witch Hazel For Skin

Witch hazel is also a powerful natural anti-inflammatory. It has been shown to combat inflammation in cases like diaper rash, razor burn, and bug bites. Because of its strong antimicrobial abilities, it’s been used traditionally to soothe poison ivy, treat chicken pox, and heal cuts and bruises, all of which are irritated by bacteria and viruses.

“Witch hazel is one of my most favorite ways to reduce puffiness, control blemishes, tighten pores, and lock in moisture,” shares Matles. It can give your skin more radiance, as it helps it heal and refine the appearance of pores. “Witch hazel’s ability to reduce inflammation and tighten skin also lends to its ability to act as a natural remedy to treat discoloration and puffiness around the eyes,” she says. Just be sure not to get any in the eyes themselves, as it may result in significant pain and lingering discomfort from dryness.

Tannins in the leaves help to tighten skin proteins, which then form a protective covering. This helps to promote skin healing and stop bleeding, making it especially useful for treating skin conditions like eczema. A study at the University Hospital Luebeck Dermatology Department in Germany discovered that Hamamelis ointment was as effective in treating children suffering from skin disorders and injuries as the prescription Dexpanthenola (used to improve hydration of the outer skin layer, reducing water loss, and maintaining skin’s softness and elasticity). It helps to keep your skin smooth and supple.

“Being that it is anti-inflammatory, witch hazel is a great addition in any moisturizing formula or gel for those who are outdoors a lot,” says esthetician Holly Cutler. “It’s also great in light gels or creams for combination and oily skin.”

Witch hazel is a highly effective ingredient for treating acne, so you’ll find it in many washes, treatment gels, and lotions. The tannins in witch hazel make it a natural astringent, helping to remove excess oil from the skin. It can help to slow down the inflammation and redness associated with breakouts, and the natural cleansing capabilities reduce bacterial growth on the skin. It’s a way to curb infections gently. It can lower the severity of blemishes forming under the skin and prevent blackheads caused by dried sebum clogged in pores. If you’ve already picked at your acne, witch hazel can help to stop the swelling and redness. Just dab a little bit on your irritated skin with a soft cotton ball or pad a few times a day.

Where to Find Witch Hazel 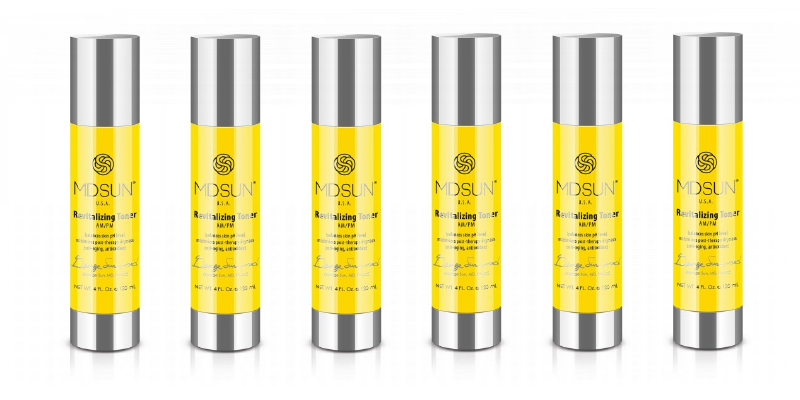 For a powerful, but lightweight restorative toner that combines witch hazel with Hyaluronic acid, aloe leaf juice, and grape seed extract, try MDSUN Revitalizing Toner. This toner is one-of-a-kind, using water to bind to the skin and providing powerful anti-aging protection from hormonal and environmental damage. 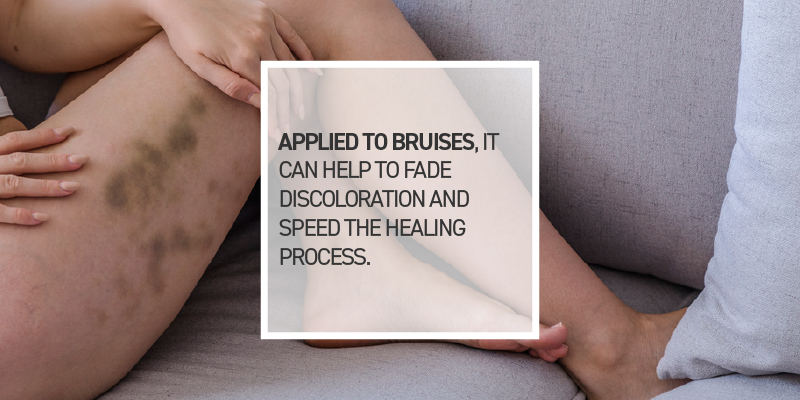 Witch hazel’s ability to tighten pores makes it useful for those that are exposed to lots of environmental pollutants. They can apply it to their face to reduce the amount of contaminants that enter pores (reducing the amount and severity of blemishes).

It’s a great post-wax or -shave treatment, since it has the ability to stop bleeding from small nicks or cuts. It’s anti-inflammatory ability helps to prevent razor burn and irritation post-waxing.

Applied to bruises, it can help to fade discoloration and speed the healing process.

Cool sunburn with a mixture of aloe vera and witch hazel to help aid healing and relieve the burning sensation. It can help to prevent damage from sun exposure. Two different studies at the BioSkin Institute for Dermatological Research and Development in Germany looked at Hamamelis’ effects in a lotion applied after exposure to UVA radiation in one study, and UVB in another. Each study showed a significant reduction in skin redness and burning after radiation exposure.