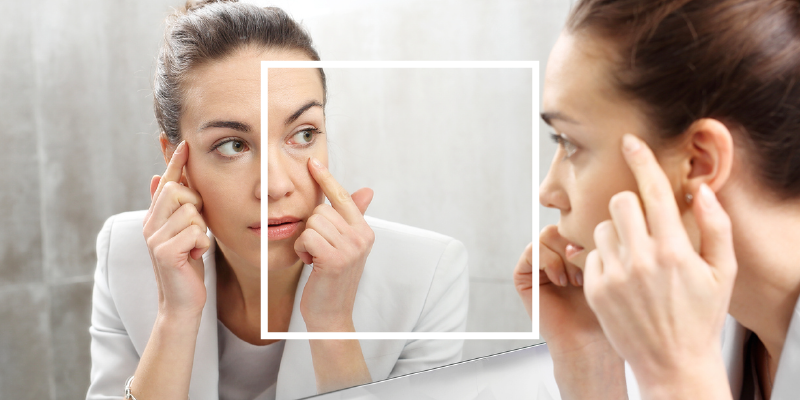 Having heavy bags under your eyes is usually something that is quite noticeable. When this problem arises, it is something we want to minimize quickly. It makes you look tired and anyone who notices might feel free to point this out. However, being tired is not the main reason that this puffiness occurs.

Scientists who study skin have found little correlation between lack of sleep and under eye bags, other than the fact that poor sleep makes under eye bags worse. Not sleeping well does not cause under eye bags to form, but it will worsen the condition.

As we get older, the tissue around our eyes changes. The upper and lower eyelids are composed of skin, muscle and fat. With age, the muscles weaken and can not hold up the skin as tightly. Skin also changes because the inner collagen support system degrades. Collagen is a protein that gives structure to our cells and contributes to elasticity. With less collagen, the skin starts to wrinkle and sag.

Other factors: fat and fluids

Prolonged exposure to gravity is not the only thing that creates bags under the eyes. Beneath the skin and muscle, the main culprit for under-eye bags and puffiness is fat. As you age, your fat starts to lose its support system, just like your skin does. Fat deposits around the eyes are protective. However, in your forties and fifties, these fat pockets can escape from the membrane that normally contains them. As the membrane weakens with age, the fat slips out and occupies new spaces under the skin. This means that the puffiness under the eyes can sometimes be due to fat deposits moving to the areas under the eyes.

A new study by plastic surgery researchers at the University of California, LA shows that this long accepted theory of shifting fat may be off the mark just a little. Rather than the membrane weakening with age, the scientists report that the amount of fat beneath the eyes actually increases to causes baggy lower eyelids. More research is needed to pin down the exact mechanism to explain droopy eyes and their correlation to fat around the eyes.

Another way that bags under the eyes are able to form is over-consuming salt. This causes your body to retain water and the resulting swelling can be apparent around the eyes. Rubbing your eyes because of allergies or tiredness may also create bags under the eyes as it encourages fluid accumulation. The irritants in the air such as pollutants and mold also seem to make under-eye swelling much worse.

Changing your behavior will not completely get rid of sagging under eye areas. There is a genetic factor at play as well. Take a look at your parents. Do they have puffy, sagging or baggy under eye areas? If the answer is yes, then you will probably experience the same. If your parents’ under eye areas are tight and in place, this is a good indication that yours will remain in place too.

Remedies for bags under the eyes

For everyone who has under eye bags, there are ways to minimize them. There are not ways to completely obliterate them unfortunately, but minimization is possible. Plastic surgery is an option. A blepharoplasty is a process that can remove, or reposition the fat that creates the under eye bags. Sometimes this process is paired with botox or facelift. This is a very pricy option and there are gentler, less expensive possibilities to explore first.

Less drastic alternatives include creams and serums that reduce puffiness. Some of these available products are over-promoted and ineffective, so doing proper research before purchase is very important to avoid frustration and disappointment. If you are likely to develop under eye bags due to genetics, then keeping up with the health of your skin will minimize their noticeability.